I had wanted to fly as far back as I can remember any of my wishes. From a very early age, I was trying to make some airplane. Right, not very successful at first. Material from vegetable crate was not quite the best you can use for modeling, but there was nothing else.

The desire for flying was a fuel which kept me going, and with every single model I dreamed about being inside the cockpit. The situation at that time, however, did not afford an emigrant´s nephew a lot of opportunities for development in different activities.

Time, however, broke the curtain and those who had been last found themselves at the forefront and what had previously been completely inconceivable became only difficult. And the designation of something as difficult means that at least it‘s possible to try. First, I was thinking about flying a hang-glider, but one needed a car to transport the wing for that. But a friend told me about a kind of "paragliding", which is a parachute that goes up the hill, starts and then flies. Its indisputable advantage was that it fit in a backpack and it was possible to hitchhike with it. It was a beautiful summer of paragliding, I also experienced flying on the Big, which is a slope parachute with very funny features and we also had a lot of fun with that. Of course, much more powerful "machines" began to appear gradually. I also met Iva while paragliding. I can prove the dangers of this sport by getting married thanks to it! 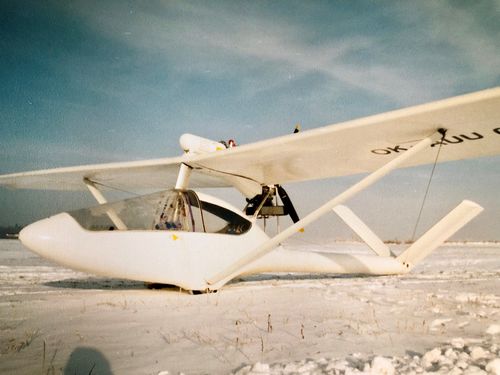 I still remember the day when Iva and I as well as a bunch of other paragliders sat on Raná Hill and waited for the weather. Down at the airport, a Škoda Favorit stopped with a strange trailer. A moment later, there was a small plane next to the trailer, and I was alert. I don‘t know why, but I went down the hill to the airport to look at it absolutely against all principles. Two older gentlemen were walking around the plane, I was watching them, and to my remark that I'd like to buy a plane one day, they replied, "Don't buy it, build it! This one cost us 30,000 CZK even with the engine. I came back to the hill and asked Iva, what about building a plane? Iva didn‘t hesitate and replied: "Okay". We didn't have any money, but our parents lent us 30,000, thinking we wanted to buy furniture as newlyweds. We bought Finnish birch plywood, so that wasn't such a stretch. From Mr. Olšanský, a designer, we bought plans for his two-seater Moby Dick. Although we spent a lot of time looking for material, we finally started the construction. We had a small studio flat on Plzeňská street. The flank of the wing fit precisely across the studio, the fuselage emerging from the window to the kitchenette, and the width of the cabin just enough to go through the window on the first floor with a centimeter margin. We had a floor on which Iva was reading aloud the stories of the Bigles pilot aloud in the evening, while I glued the wings into the templates. We completed the aircraft during the year. Of course, we still had a lot of trouble, but in the end we flew the plane. Then we moved from Benešov airport to a small airport near Beroun. Together with Jean Paul, the Swiss engine tricycle pilot, we gave him the name Buranos Aires, which remained until today. Those were beautiful years when Iva and I were looking for flight experience through trial and error. This is not the smartest way to gain experience and today I would like to call our students down for some of the things I myself was doing, but there was no one around to tell us how things are going. Fortunately, we survived, probably because we did not engage in any deliberate insanity during our practice runs. 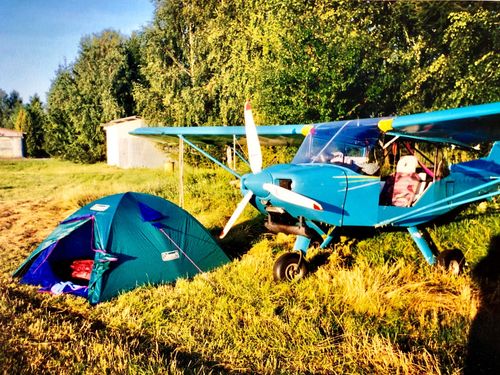 We liked flying and we were looking for a way to gain some money from that for quite an expensive operation. The only way was a school. There is nothing else to do with UL aircraft. We built a beautiful Condor 232 from a kit, but we did not want anybody unknown to us to fly traffic patterns in this orchid, so we bought a second hand Typhoon aircraft. This was an amazing machine, simple in design and control and so ugly you just had to love it. I flew it for a lot of hours with the students. From the initial idea that we would sometimes teach a friend to fly, a real school gradually came into existence. For some reason, when we do something, we do not like doing it only half-heartedly. 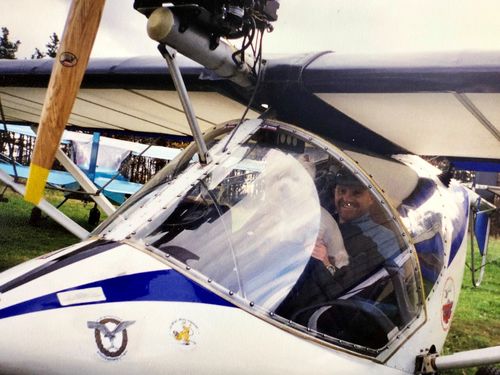 Indeed, our Typhoon was getting a bit outdated for basic training. We fell in love with the brand new Typhoon - Zephyr 2000. Although it was beyond our capabilities, we decided to take a huge risk. The company also sold the kit for this machine.

We decided to buy it using the very popular leasing at that time, using the engine and the instruments from Typhoon to be built into the kit. It wasn‘t possible to build it in our studio flat, but fortunately a friend lent us his newly built workshop. We had to make the plane during the winter. We were also working on New Year's Eve at midnight, but we made it. The Zephyr was suddenly in great demand, and at weekends we were even flying 11 hours a day and the school got off to a good start. Other planes and extensions to PPL and gradually to FTO, helicopters and their training, it somehow came itself. Of course, we could no longer work only at the weekends or while doing another activity, we had to professionalize, but that was our dream anyway.

Gradually, we moved from our original Mash style tent through a caravan office, a rented room at Sazená Airport to our current place, where we are finally a bit at our own premises.